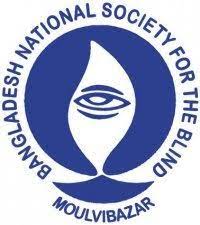 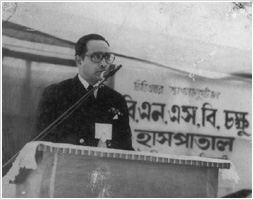 The year of 1974. The Chittagong wing of BNSB issued a letter to the then SDO, Mr. Niamot Ali to organize an Eye camp. The letter did not get any importance because of any unknown reasons. But another letter had been issued informing that a group is going to Moulvibazar for an Eye Camp. The district commissioner took initiatives for organizing the Eye Camp through a quick meeting.In that meeting, the general secretary resigned, as there was no physician in the medical team coming from Chittagong. He also informed the other doctors that there is no physician in the team. There are some ordinary members from Lion Club. Uncertainty arose to realize the Eye camp.SDO told to take the responsibility to Dr. Shah Nural Islam, the Life Member Honorary General Secretary. Otherwise the doctors of Moulvibazar will be ashamed of this. He also showed the excuse of not having physicians in the team. At last he took the responsibility amid pressure. Later he came to know that the admininistrative officer himself was an Eye specialist.In that Eye Camp, 58 patients, both male and female got registration. But only 55 took treatment. Dr. Shah Nural Islam told an interesting story about his first Eye Camp held in Moulvibazar Govt. School Hostel and Moulvibazar Club. There was a usual gathering of people in the field near the hostel.Initiatives:By this Eye Camp Dr. Shah Nurual Islam became intimate with Dr. TK Chowdhury. Dr.TK Chowdhury kept him encouraging building up an Eye Hospital in Moulvibazar.At the early stage, he was in doubt about the possible source of money. Mr.TK Chowdhury also encouraged him telling that money is not a problem. He furher said that if you take initiatives, you would get the fund.Money is not a problem for any social welfare activity. All we need is cordial initiatives. Shah Nurul Islam along with his fellow companion starting building the hospital. A committee of BNSB was formed in 1981.A derelict land was found two kilometers away from Moulvibazar town near Matharkapan area. Some donors were also found to help locally. A man seeking anonymity donated TK. 4 lac. Primarily, the construction work started spending TK 10 lac.The then communication minister, Rear Admiral M.A Khan laid the foundation stone. Shah Nurul Islam informed that he collected TK 18 lac from the expatriates of Moulvibazar.In 1986, the founder President of Andari Helphi of Germeny Miss Rosy Golman, inaugurated the structure of the hospital. The activities for constructing the hospital were started.At the early stage, it was a 10-bed hospital. Now it has promoted into 31 beds. At the beginning, the programme was started in only one building.Now the number of buildings is five. Even though, having various amount of money from the health ministry, the hospital has to continue its journey with its own income.The main source of income is registration, blood test and operation charge. The hospital did not look back from then on.